A few weeks ago Sarah Wynn asked me what Colin’s thoughts might be about his
transition from being part of a professional eventing team and Leicestershire
hunter, to TREC ponyo.

Colin came to live with me in March, shortly after I had had to put down my very
beloved Frank, a friend of over 15 years. Colin’s introduction to TREC came when I
took him to Central TREC’s arena competition at Brooksby. When faced with the
indoor school, with which he had been very familiar from in his previous life of
show-jumping and dressage, but now full of poles, bollards and plastic pimples
set out in extraordinary patterns, he seemed somewhat flummoxed! However he
joined in the fun by going over, under, through or round everything with a
bemused and at times bewildered expression on his face. I think he thought the
MA particularly pointless! Why on earth would one go into the arena for what is
clearly a competition, canter very slowly, and then stop, before starting a
purposeful walk on the opposite direction? I think he probably thought his new
owner was a bit potty, but harmless potty and not dangerous potty so best
humour her and go along with whatever she asks! 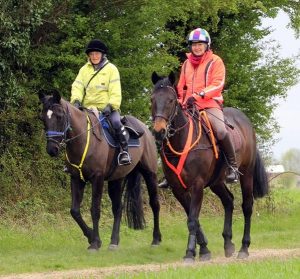 Moving on to summer TREC. What fun! We did a couple of one-day Level 1s to
start with, just to get the feel of each other and he also learnt about flapping
map-cases and staying in a corral rather than being tied up to the trailer in the
lorry park.

And then it was on to the serious stuff…the over-nighters. He loves the camping,
who needs a comfy stable? Sleeping next door to mum is rather fun! At the first
competition, full of rich Oxfordshire grass he farted all night. The following
evening I redesigned his corral to be long and thin, with the juiciest grass being
at the furthest end so as not to disturb my beauty sleep. Problem solved! Then
the next weekend on rather drier Hertfordshire grass he decided he had an itchy
bottom and spent a large proportion of the night scratching it against my trailer,
again rendering me sleepless! During the following day I inadvertently managed
to short the electric fencer on to the trailer whilst I was walking the PTV. So
again problem solved, nothing like a shock up your bum to cure the tickles!
He thoroughly enjoys the POR, loves exploring up hill and down dale, and would
happily walk, trot or canter all day on a long rein. But we still haven’t cracked the
MA or the PTV. His eventing brain kicks in every time. Mum in a crash hat and
body protector? Surely that means gallop, gallop, gallop? He has the most
beautiful slow collected canter in a dressage test, but do that in the middle of a
field…no way! Similarly, if we are galloping round what to him seems like a
cross-country course, why on earth would one suddenly stop and go backwards?
And if mum must dismount, (why?) then time is of the essence; stand still for her
to mount? Hmm, no chance! And as for any sort of immobility, led or ridden, well
that really is a waste of time! 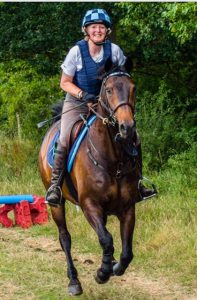 Back in March, I said to my long standing friend and partner in TREC Robin that I
didn’t want to go to the Level 2 Championships this summer as I felt it was such a long way to go, especially as Colin was so inexperienced. However, it didn’t take
me long to change my mind! Colin may not put in the high scores on the PTV that
Frank used to deliver, indeed he may never achieve those, but he, like Frank is
such fun to ride in a TREC competition.

I expect Colin still thinks I’m still a bit potty, but definitely harmless potty and
certainly not dangerous potty! He too has been totally bitten by the TREC bug and
he is enjoying being part of the TREC community where friendly rivalry is the
order of the day, not the cut-throat competitiveness of eventing and show-
jumping. He is now a happy and contented ponyo, which he certainly wasn’t
when I bought him!