The first TREC competition of the season normally brings with it the challenge of finding all of your TREC kit from where you packed it away for the winter, however for me this was a minor task in comparison to readying my lorry for a weekend with a toddler! Last season my daughter, Sophie, travelled to two TREC competitions, her first at seven weeks old and her second at four months old. This season she is a year old and becoming increasingly mobile so sleeping arrangements required a rethink. 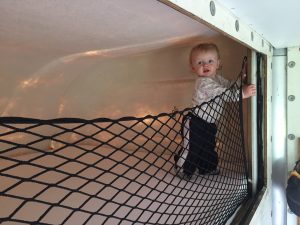 My lorry, fitted with cargo mesh baby catching device across the luton, was packed with a minority of TREC equipment versus a majority of child transportation devices and off we set for a family weekend in the National Forest, south Derbyshire, family consisting of two adults, one toddler, one labrador and a horse.

We arrived at the venue on Friday evening, found ourselves a parking place that was only on a slight incline and set about clearing up the exploding nappy that Sophie had produced en route; how my TREC experience has changed now that I’ve got a family in tow!

Saturday morning, after a rather sleepless night, I was grateful that I was competing at Level 2a as my map room time was 10:25am – a distinct difference from the 7:30am start times that I was accustomed to when competing at Level 4. Mum and I were competing as a pair so whilst copying the route we were able to point out to each other kinks in the route that we thought required extra care to draw accurately. Route copied and kilometres measured, we then had extra time in the map room to plot our grid references that would be used later. What a luxury to be able to plot on a flat, dry table instead of plotting whilst crouched on the ground as your horse tries to pull you to the lushest patch of grass that is just out of reach!

The POR route that had been set by Lynne Mabbitt was a joy to ride. We crossed a variety of terrain including farmland, country park and woodland and were blessed with glorious sunshine in which to enjoy the stunning views that Derbyshire has to offer. My horse, Wiz, is suffering a bit of neglect now that I’m a mother and no longer able to ride when I like so his fitness levels are somewhat depleted from previous seasons; despite this he coped really well with the ride and I only felt his energy levels drop once on a particularly undulating section of the course running along the eastern edge of Foremark Reservoir. A hoon up a grass margin shortly after followed by a drink and quick rinse in the next checkpoint soon perked him back up again! Lynne had set technical challenges around the route to make sure we were concentrating and didn’t cut any corners. 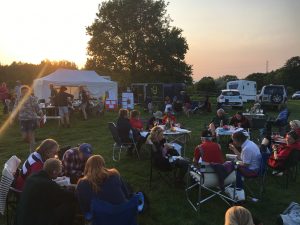 The Saturday evening social was the epitome of what TREC is all about – a gathering of like minded people enjoying the beautiful evening with excellent food provided by the Roaming Bistro whilst sharing our experiences of the day. The Young Riders squad put on a quiz to raise funds for their trip to Italy so our brain matter was given a final exercise for the day. Quiz master Liane Robinson had a heart stopping moment when three teams cheered to claim the one first prize that she’d brought, thankfully her heart was able to restart when she discovered that one team had half a point more than the other two teams so saving her from having to stretch one prize across 12 people!

Sunday was MA and PTV day and again the sun shone. The MA corridor was straight but not straightforward as a bare earthed track crossed just before the end, requiring careful riding to avoid a break of pace. Wiz took a couple of attempts to get an approach in a reasonable canter but once we went through the timing gates he clicked into mode and I was able to sit quietly and not interfere. His walk in previous seasons had been deteriorating with a few breaks to trot and getting progressively slower but today his stride had the relaxed swing of former years so I was grateful for another sign that my new saddle was a good investment.

With the nerve wracking MA out of the way we could really look forward to the PTV which started with Wiz’s favourite obstacle, the low branches. We rocketed through at top speed as usual and then slammed on the anchors and just stopped in time to collect our thoughts for the bending. The rest of the course continued in the same vein with obstacles clustered in groups allowing quick canters in between but then requiring the horse to quickly calm and regain focus for the next cluster. Wiz put in a good round and I was particularly pleased with getting him over the water tray with minimal fuss. 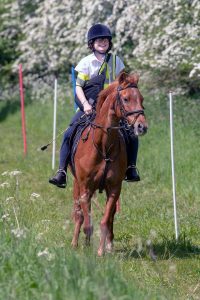 Scores were collected throughout the day by the ever smiling Scarlett riding Twinkle and the final scores put us in first place, therefore achieving our target for the weekend of qualifying for the championships in September.

The final reckoning of pennies is still to be completed but it’s looking like the event has raised over £1,000 for the squad riders with more money raised by fundraising activities over the weekend by the Young Riders.

Thanks to Jackie, Lynne, the TD Simon Cherrington and all the helpers who enabled the weekend to run so well and be so enjoyable. I’m pleased to say the Lea family had a fantastic weekend in the sunshine, we’re very much looking forward to our next TREC outing although we’re hoping to have at least started the insulate the living area of the lorry in the hope of achieving a little more sleep!